Blog / Everything You Need to Know About Impatiens Plant Care

Everything You Need to Know About Impatiens Plant Care 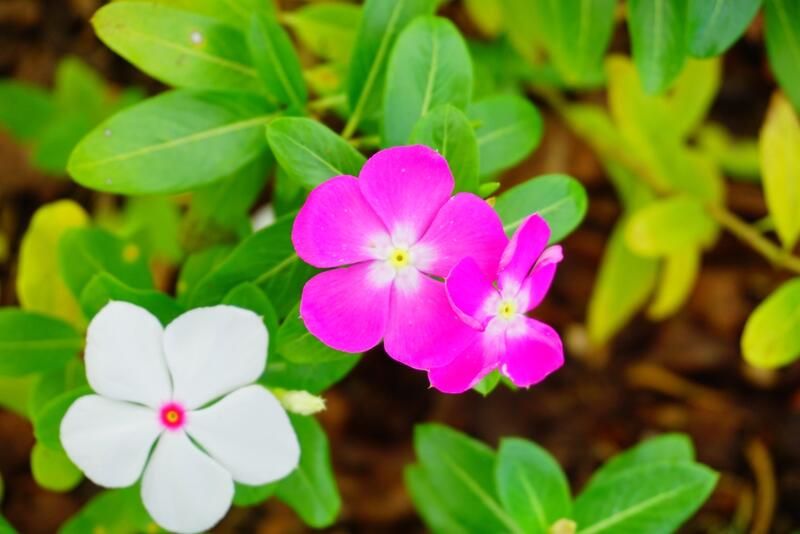 Is your yard starting to look a bit gloomy? Very dull with almost no color? Or are you just simply bored of the typical plants you have growing around your yard? It's time you spruce things up by growing impatiens! All season long, these vibrant flowers continue to blossom.

Bright and cheery annual impatiens flowers (also known as touch-me-not) will brighten any gloomy and shady area of your yard. Impatiens are quite simple to grow, but there are a few things to know about impatiens' maintenance. Let's explore the planting and care of these beautiful impatiens.

The 2 Main Types of Impatiens

Due to their vibrantly colored, plentiful blooms, and ability to grow in shade, impatiens plants are among the most popular bedding flowers. Impatiens are typically cultivated as annuals, where their spring-to-fall blooming season fills the garden with color, even though they are perennial plants in tropical climates. White, red, pink, violet, coral, purple, and yellow are among the colors of the standard impatiens flower (a relative newcomer).

One of the most popular bedding plants used to spruce up public parks and someone's garden bed around the world is Impatiens walleriana, popularly known as busy Lizzie or balsam. In countries without frost, it is a herbaceous perennial, although, in many parts of the United States (particularly USDA hardiness zones 10 and 11) and other temperate regions, it is considered a half-hardy annual. Standard impatiens (like impatiens walleriana) come in a range of colors, thrive in full or partial shade, and, depending on the cultivar, can reach heights of up to two feet. The most widely produced impatiens variety worldwide is the hybrid known as the "Super Elfin" cultivar. 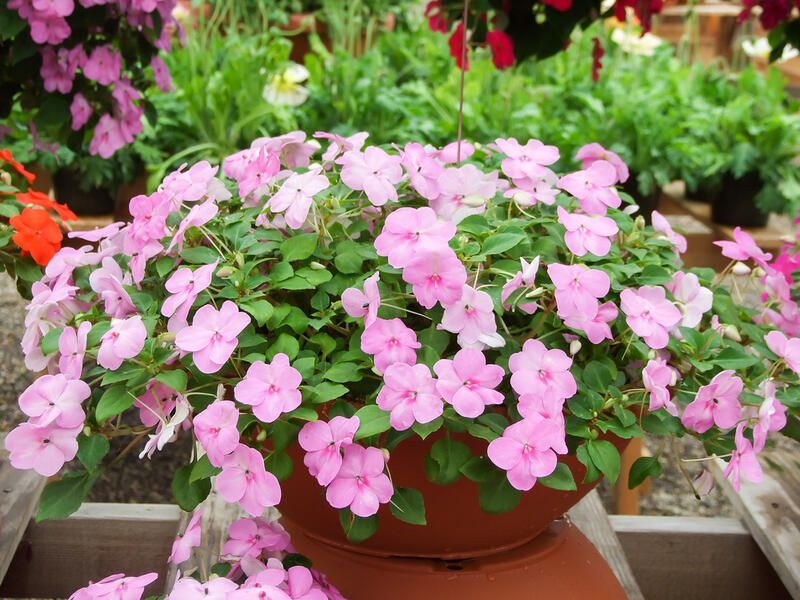 Here comes the second variety of one of the most popular bedding plants, the Impatiens hawkeri, also known as New Guinea Impatiens, which is a hybrid variety that yields larger and more colorful flowers than regular impatiens. It is often referred to as a sun impatiens due to its higher tolerance for sunshine. The foliage of the three-foot-tall, mildew-resistant New Guinea impatiens comes in a variety of colors, including green, purple, and bronze. New Guinea impatiens are often more challenging to grow from seed. The Sunpatien series, which tolerates full sun conditions (and also does well in partial shade), is one of the most recent and well-liked varieties of New Guinea impatiens. 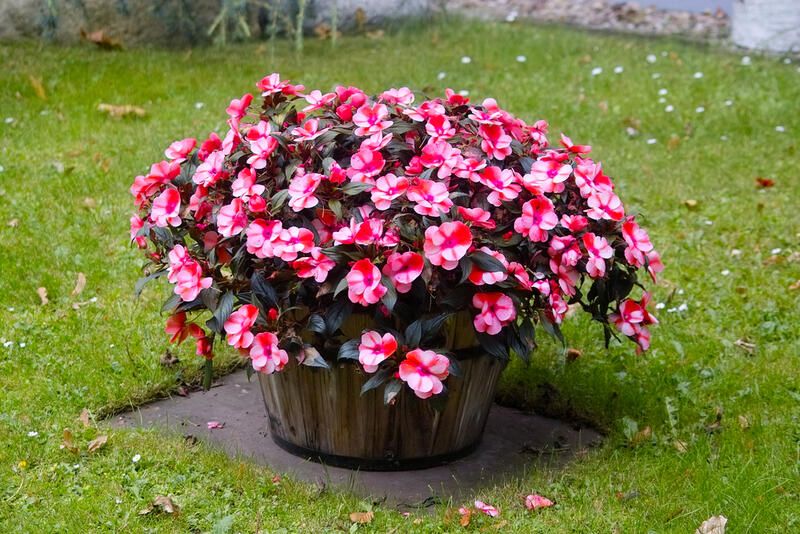 As long as you stick to a few basic rules, planting impatiens is a simple procedure. Impatiens plants are typically obtained from the garden center as well-rooted plants. They are also very simple to grow from seeds or cuttings. You can plant impatiens very easily which makes them a hot flower to have in your garden. Make sure to keep your annual plants well-watered when you bring them home from the store until you plant them. They are extremely sensitive to water shortage and will quickly wilt if they do.

Here are a few key points to keep in mind when you grow impatiens:

In northern climates, standard impatiens can be grown in a site that is partly sunny with enough water, but their greatest strength is that they do best in deep shade. Impatiens love indirect sunlight and they can survive cold temperatures. Even when grown in complete shadow, they are one of the relatively few commonly available, low-cost flowering plants that will put on an excellent summer-long floral display. Try to keep them away from the full sun.

Grow standard impatiens flowers in organically rich, well-drained soil (make sure you keep your soil moist). They prefer a pH range of 6.0 to 6.5 in their slightly acidic soil. To avoid becoming soggy from the impatiens' regular watering needs, the soil must drain effectively yet still maintain soil moisture.

Impatiens will bloom at their best if fertilized frequently. In the spring and summer, water-soluble fertilizer can be applied every two weeks for healthier impatiens. A slow-release fertilizer applied at the start of spring and once more midway through summer provides an additional choice. Follow the directions on the product packaging for how much to use. Liquid fertilizer is also a good option to consider.

Standard impatiens require at least 2 inches of water per week once planted in the ground. Water the plants at least 4 inches every week when the average temperature is persistently higher than 80 degrees Fahrenheit. Impatiens in window boxes, a flower bed, and hanging baskets may require daily watering, particularly if the daily high temperature exceeds 85 degrees Fahrenheit.

Impatiens are extremely heat-sensitive. Your plants may probably appear withered if there has been a prolonged dry spell. Thankfully, once given water, they swiftly recover. Humid conditions are suitable for impatiens growth. 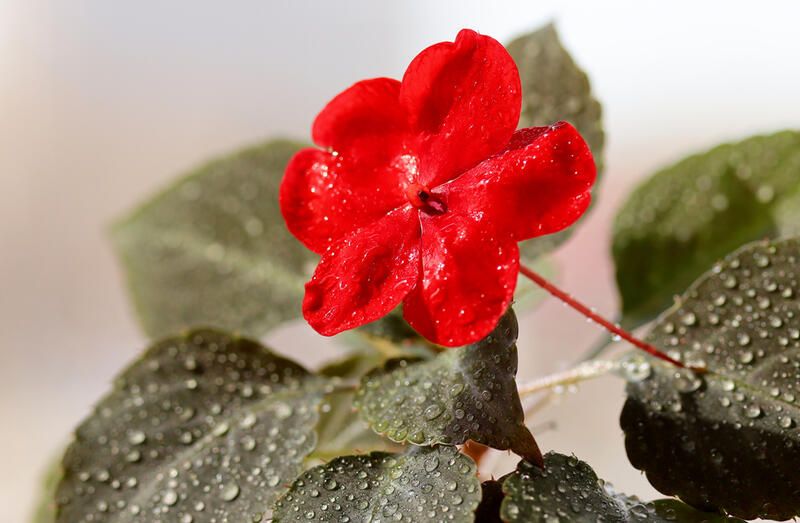 Impatiens, which translates to "impatient" in Latin, is where impatiens flowers get their name. They get their name from the fact that occasionally simply a light touch would force their ripe seed pods to burst open (as if they were impatient to open). The seeds from these "exploding" pods that the plants generate in the late summer and fall are also harvested by some gardeners, who then start the seeds indoors in a seed-starting mix in the latter winter, six to ten weeks before the last frost. It might take impatiens many months to develop into flowering plants after being sown from seeds. 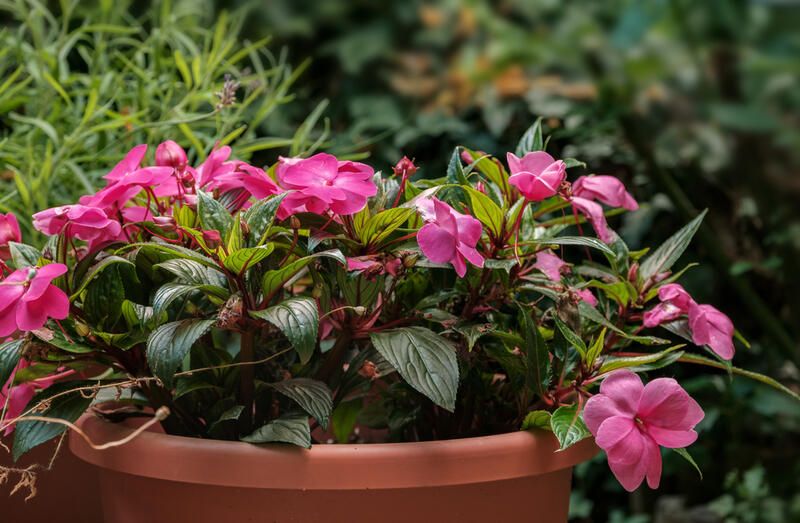 How to Care for Impatiens

Use these basic guidelines to provide your impatiens with the best possible growing environment and raise the potential of a healthy, eye-catching flower bloom.

Frequently water your soil to keep it moist. A decent rule is to give plants two inches of water every week but be careful not to overwater. Impatiens leaves won't wilt in hot weather if you cover the soil with an organic mulch layer, which will also assist the soil to retain moisture. Your impatiens will normally require more water if you placed them in a container as opposed to the ground.

Regularly fertilize during the growing season. Impatiens flower blooms are more likely to be healthier with regular fertilization. Every two weeks, use a water-soluble fertilizer to the directions. If you applied a slow-release fertilizer when you were planting, you can use it again in the middle of the summer. 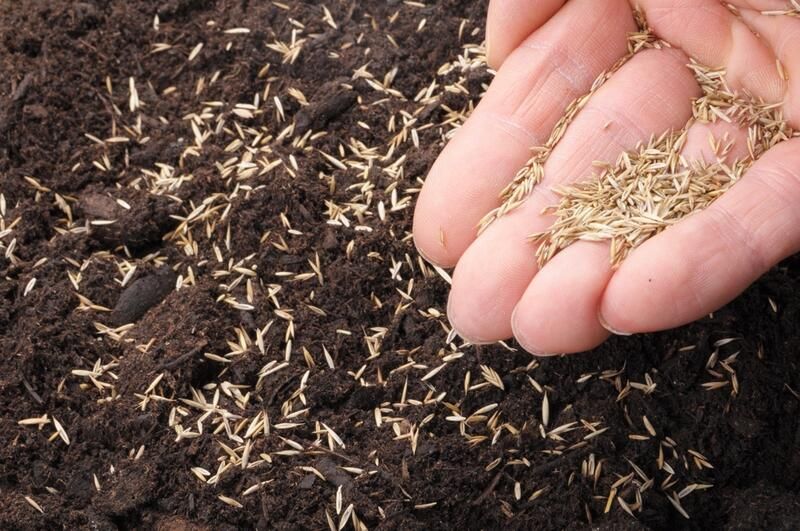 Impatiens don't have many insect problems, although occasionally your plants could get infected with red spider mites and aphids. You can treat these infestations with a garden hose, and you can avoid spider mites by growing fragrant herbs close to your impatiens, such as chamomile, rosemary, or garlic.

Impatiens are susceptible to the illness known as "root rot," which causes brown lesions on the stem below the soil line and wilted foliage. Make sure you don't overwater your impatiens to avoid unhealthy roots. Careful irrigation also aids in preventing mildew. Although New Guinea impatiens are resistant to mildew, the common species is quite prone to impatiens' downy mildew. Yellow leaves that are wilting and have white spores on them are signs of downy mildew. By keeping the leaves dry during watering and making sure your plants have enough air circulation, you may avoid powdery mildew. If you do find downy mildew on impatiens, get rid of the affected plants right away.

Use sterile, precise garden shears to remove the top third of the greenery from your impatiens plants if they begin to look lanky late in the summer. This will encourage the growth of fresh blooms and enhance the plants' overall beauty. 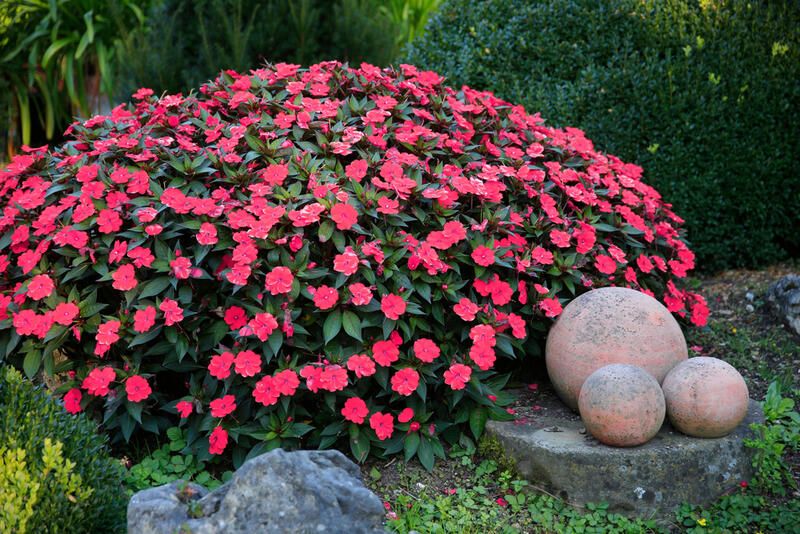 Even in colder locations, impatiens rapidly self-seed, though it can take the majority of the growing season the following year for the seeds to sprout into flowering plants. Because of this, propagating impatiens from cuttings collected in the fall is simpler. Using cuttings, grow impatiens as follows:

Impatiens are typically thrown away at the end of the growing season, therefore they rarely need to be repotted. Although these plants are perennial in warm climates, moving them indoors may expose them to mites and other insect problems. The best course of action is to trim the stems back to about 3 inches, then provide them with a sunny spot and a little less water throughout the winter. Through the winter, avoid fertilizing. These plants do not fall dormant, but if you allow them to slow down for the winter, they will probably survive. 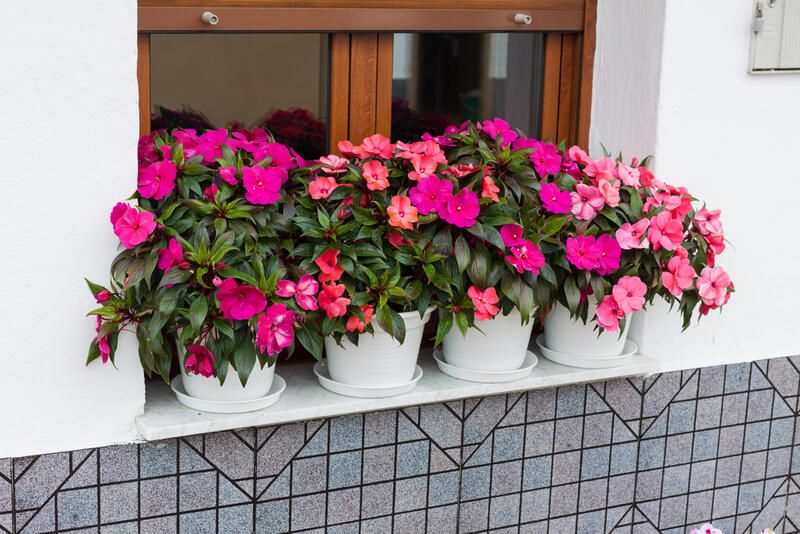 The first little cold will cause impatiens, which are tropical plants, to mush. Remove and destroy these plants to stop germs from hibernating. Potted plants can be disposed of similarly, or you can move them indoors if you want to keep them through the winter months.

Among all flowering plants, impatiens are among the most prolific bloomers. From late April until the first deadly frost, abundant flowers are often to be expected. If the impatiens aren't flowering as vigorously as you'd like, consider trimming the lanky stems; this usually encourages the emergence of new buds. Plants that receive too much sun, not enough water, or too much fertilizer may also have reduced blossoming.

Things to Look Out For

Although these simple-to-grow flowers can usually be left alone, they will nonetheless present a few typical difficulties.

Over-fertilization is one factor that could contribute to leggy impatiens.

A fungus-like organism termed an "oomycete" is what causes impatiens downy mildew, which kills bedding impatiens, also known as busy lizzies, by causing yellowing leaves, leaf loss, and other symptoms. Attacks outside are most likely to occur in the summer, while they may start in greenhouses in the spring.

Systemic fungicides are particularly useful for controlling downy mildew since they have a limited absorption rate by plants and are effective at combating the downy mildew pathogen.

The leaves of most impatiens kinds can become scorched by too much sun, however, the New Guinea varieties can typically withstand full light if provided enough hydration.

Get to Planting impatiens

You have everything you need to grow some gorgeous and vibrant shades of impatiens! Now get to it and get the colorful garden you've always dreamed of!