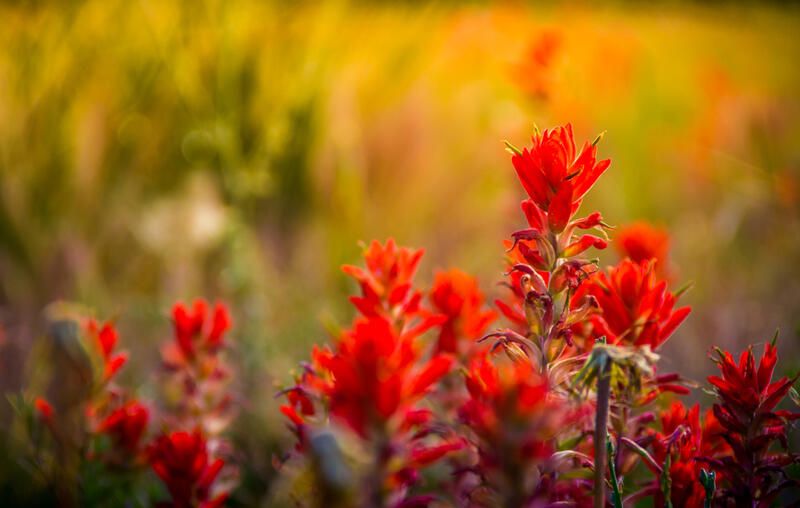 Gardening with native plants can be a fun way to add a glimpse of the natural world into your home garden.

Native plants provide colorful flowers and shrubs for your yard, while also providing a natural habitat for other animals.

They provide food and shelter for birds and insects, help to prevent soil erosion, reduce water use, and filter pollution from runoff.

Many types of species of native plants have evolved together over thousands of years to form symbiotic relationships with each other. These relationships give rise to the diversity of plant life we enjoy today!

Native plants can also help attract insect pollinators like bees and butterflies to your garden.

Additionally, with the increasing concern for declining bee populations, planting native flowers become crucial to ensure that these creatures can thrive as pollinators in our ecosystem!

Here are 20 of ShrubHub’s favorite native plant species that will add help you create the perfect native garden:

Western poplars are trees that grow to over 100 feet tall. They have a straight trunk, a conical crown, and large, heart-shaped leaves. They grow yellow drooping flowers (catkins) in spring before their leaves appear.

Western poplar trees thrive in the west half of Alberta with its cold winters, wet springs, and hot summers. It grows on flood plains along rivers and streams where it can receive plenty of water during dry periods. 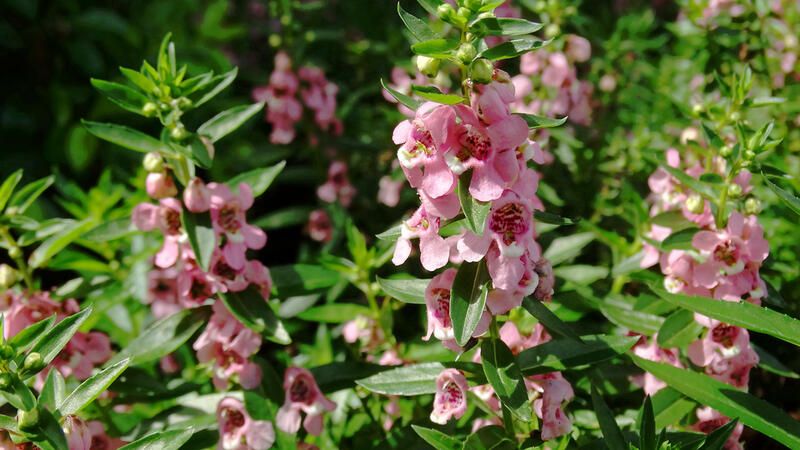 This Alberta native can be found in moist, well-drained areas of Alberta's natural habitat. The Canada Anemone is a perennial bulb that grows up to 3 feet tall and spreads by rhizomes.

This plant has pinkish-purple petals with a white center and tubular shape, which bloom from early spring through summer.

If you're interested in attracting native bees and wildlife to pollinate your flowers, then Canada Anemone is exactly what you need. 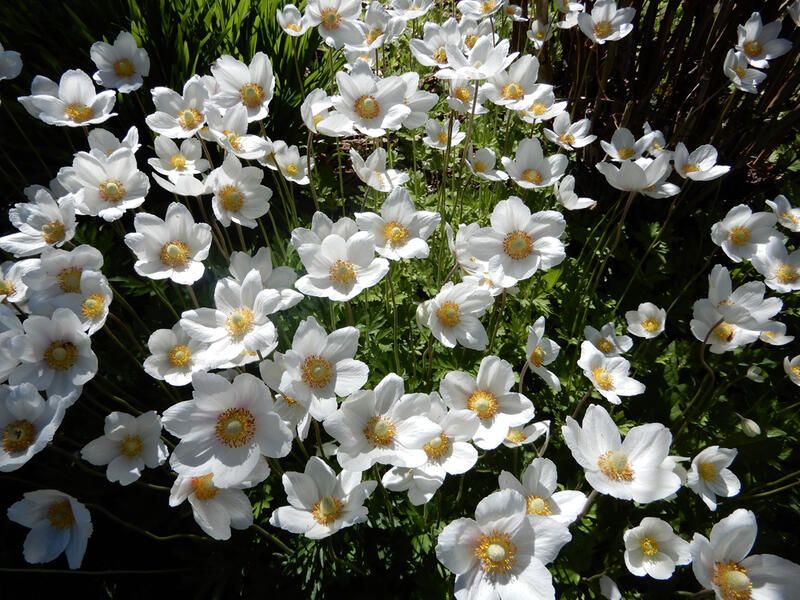 Western blue flax is a native plant that grows in western North America.

It flowers during late summer and fall, and its flower color is blue. Its flowers are small and the plant itself has a low stature (growing less than 1 meter tall).

The plant's shape is bushy, with long stems that branch out from the central stalk.

If you like to grow native plants, this one will be a good fit for your garden! 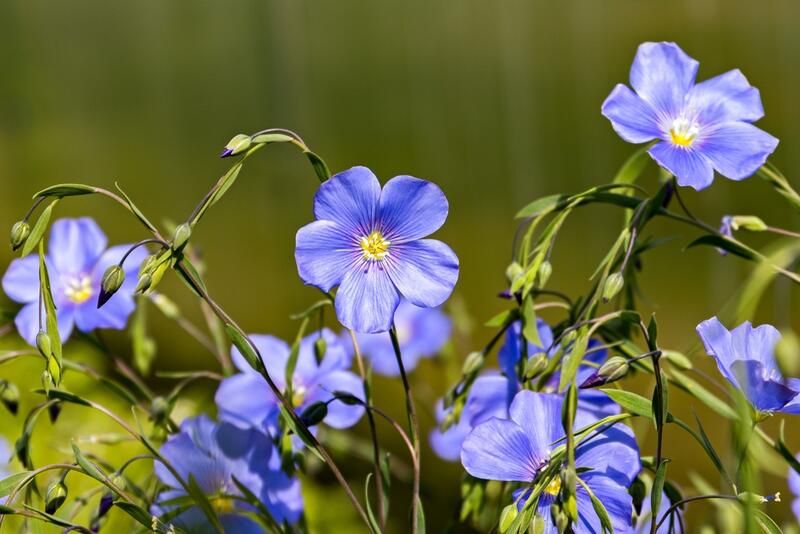 This is a perennial plant that blooms in summer and grows to be 1-3 feet tall. Fireweed is native to Canada and the northern United States, but it has been introduced elsewhere as an ornamental plant. It’s also considered an invasive weed in some areas.

Fireweed is pollinated by bees, butterflies, and hummingbirds. The flowers are red or tubular purple flowers with yellow centers that look like little fireworks exploding out of the plants! 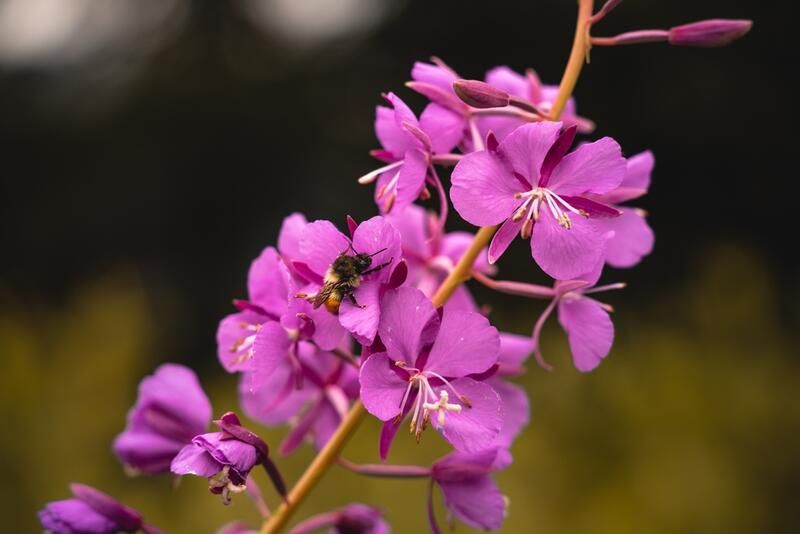 Brown Eyed Susan is native to the Pacific Northwest, but it can be grown in a large container and thrives in Alberta.

It is also known as “Tall Coneflower” or “Three-Leaved Ironweed”. It has bright yellow flowers that bloom from July until September.

This flower grows up to three feet tall, but it does not need much space because it spreads quickly by seed.

They can also be grown in dry areas or wet areas, sunny spots, and shady spots! 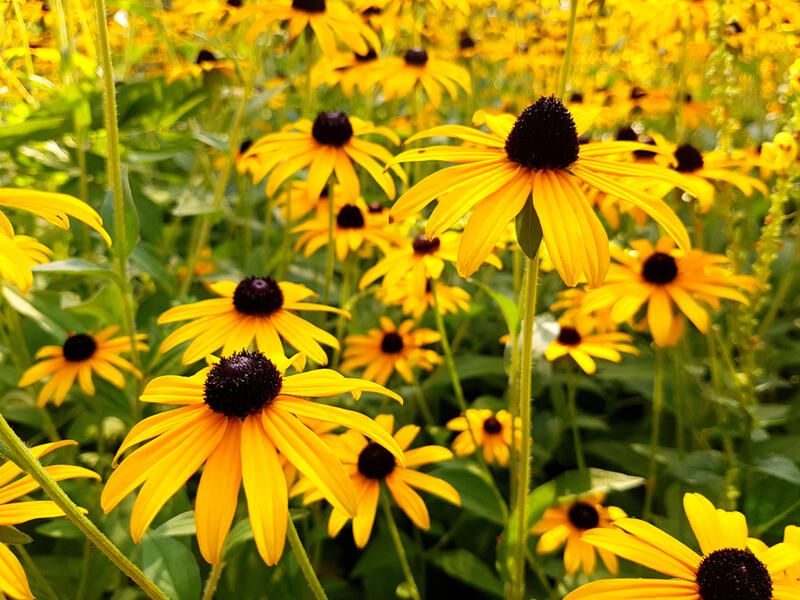 The Western Red Lily is a hardy perennial that can grow anywhere in Alberta.

Even though it prefers moist soil, it will tolerate dry conditions and does not require much water after initial establishment.

The intense red flowers bloom in early summer and provide food for insect pollinators such as bees, butterflies, moths, and many more insects.

These native plants help to attract pollinators to your garden or natural area which is good for the environment because they contribute significantly to biodiversity. 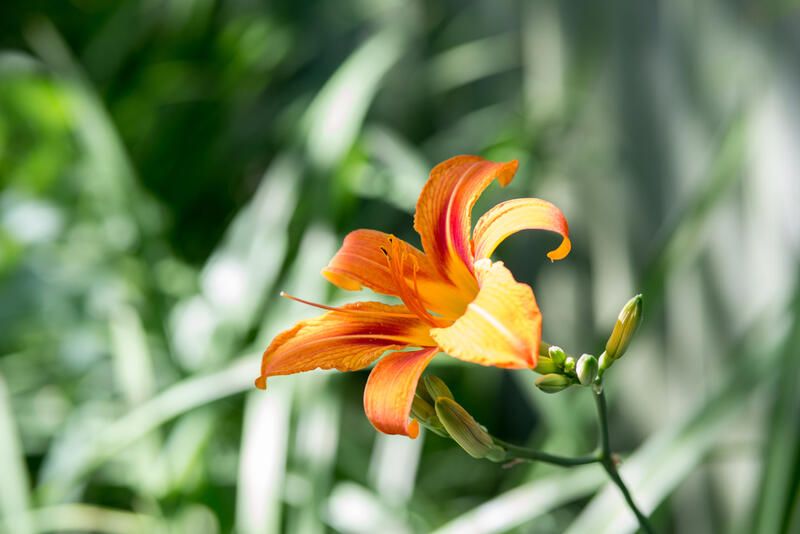 Gaillardia is a perennial that blooms in late summer and early fall. This native plant can grow up to 1.5 m tall, although it’s more commonly seen at about 40 cm.

The flowers are yellow with red centers, making them very attractive to pollinators like bees and butterflies.

Gaillardia is native to North America, where it grows throughout the United States and Canada.

It prefers dry areas with well-drained soil but can tolerate moist conditions too (although its leaves will turn brown if left underwater for extended periods).

You can plant Gaillardia in a sunny or partially shaded area of your garden, as long as you protect it from strong winds which could blow over young seedlings before they have time to establish themselves. 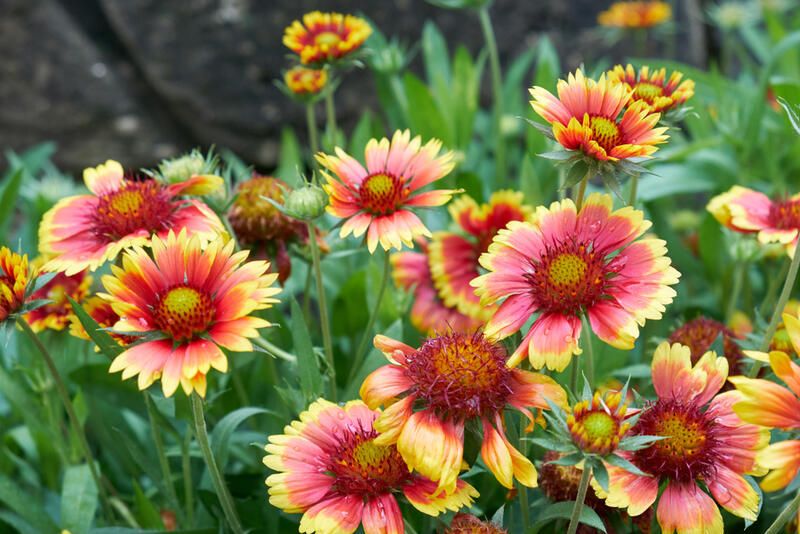 Licorice root is a perennial herb that grows up to three feet tall. It has sweet licorice-flavored leaves and is native to the Pacific Northwest.

The plant likes moist soil and partial shade, where it will grow as tall as three feet with long leaves that curl at their ends.

Licorice root also produces small bright-colored flowers in springtime, which are pollinated by bees and hummingbirds.

This name might be a bit confusing, but these plants are also known as butterfly bushes. It's a perennial that flowers in late summer, with bright yellow flowers and glossy green leaves.

The plant grows to about 2 feet tall and spreads to about 3 feet wide. Since it's so small, it can fit in even the tiniest garden spaces and still give you plenty of butterflies and bees!

Buffalo Beans are hardy to zone 3—and they’re easy to grow from seed or by dividing clumps when they get too big (which will take years).

Plant buffalo beans in full sun or partial shade, then sit back and watch your butterfly population soar! 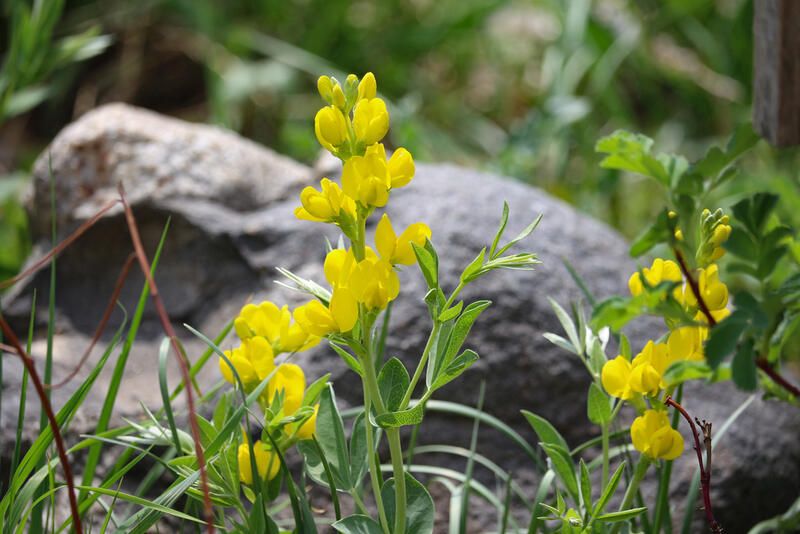 Asters are a staple of the Canadian autumn and bloom from late August to early November. They can be found in a variety of species and cultivars, including white, yellow, pink, or purple flowers.

Aster native plants are most suited for borders or rock gardens because they grow well in full sun or partial shade.

They will also make good ground cover if you want to add some color to your yard without having to worry about mowing them down every week!

The Lemonade Berry is a small-growing shrub with bright yellow flowers. It's native to Alberta and is a member of the honeysuckle family.

This perennial plant can grow up to 1.5 meters tall, making it an ideal beginner's plant for your garden!

The best part about this plant? It produces berries year-round, so you'll always have something tasty in your backyard.

These berries are sweet yet tart, similar to lemons (hence their name). You can eat these berries fresh off the vine or freeze them for later use as a pie filling or jam-making ingredients.

Clematis is another native plant to Alberta and is in the mint family. It grows as a flowering shrub in the spring, and it produces beautiful flowers that appear in pink, white or purple colors.

These native plants can be used as ground cover or climbers depending on what you want for your garden. 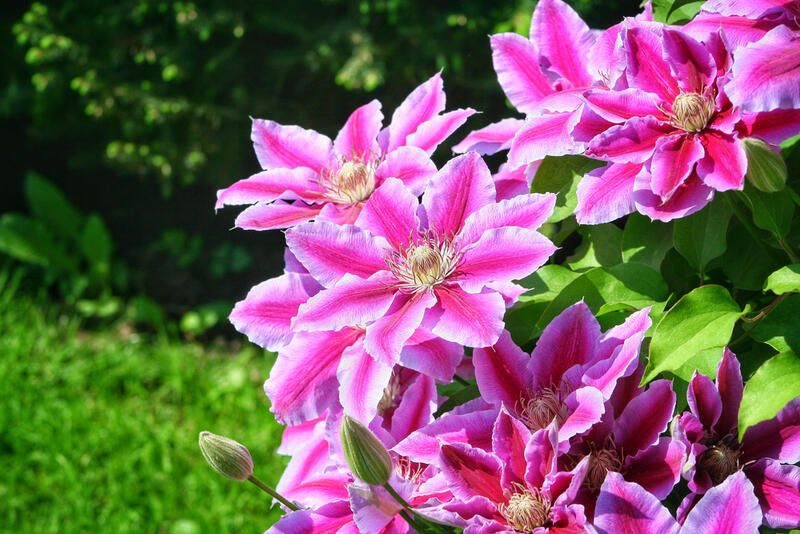 Pearl yarrow, also known as common yarrow, is native to the prairies and has white flowers with pearly petals. The yellow center of the flower catches the eye of insects and birds, both of which are drawn in by its pollen and nectar.

It’s drought tolerant, so you won’t have to worry about watering it too much or not at all.

You can plant this perennial in your garden or meadow because it will grow well in either environment.

A native perennial that blooms from June to August, fleabane is one of the most common and easiest-to-find flowers in Alberta.

It grows up to 6 feet tall with yellow, daisy-like flowers and can be used in various ways, including as an herbal tea or ground cover.

The name comes from its ability to repel fleas when rubbed on your pet’s fur! 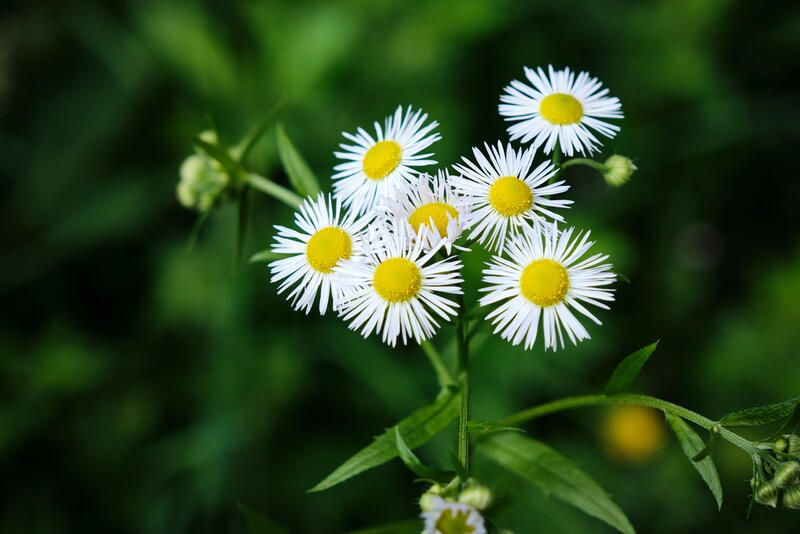 This native tree is a great choice for those who want to do their part in providing a habitat for wildlife in their yards.

It is a small tree with yellow flowers that grows up to 10 feet tall and wide, making it perfect for smaller spaces.

It can grow in wet or dry soil and even as a bonsai!

Anise Hyssops are plants native to Alberta and can be seen blooming in mid-summer.

The flowers are purple with a tubular shape, making them a lovely addition to any garden.

These native plants reach 6 to 12 inches tall and have a flowering period lasting from July to September.

As with many other herbs, Anise Hyssop has many uses including:

Indian Paintbrush is another beautiful native plant that blooms in mid to late summer with red, yellow, and orange flowers.

It's native to western Canada and the prairie provinces. It can be grown in full sun or partial shade is easy to grow from seed and can be planted in either the spring or fall.

Goldenrod is a member of the aster family, and like most Albertan natives, can be found in dry prairies.

Its flowers are used by pollinators as well as humans—it's been boiled and used to treat coughs and congestion.

The leaves were also once dried and smoked to treat asthma symptoms.

Goldenrod grows at an average height of two feet tall with big yellow blooms that attract bees and butterflies alike! 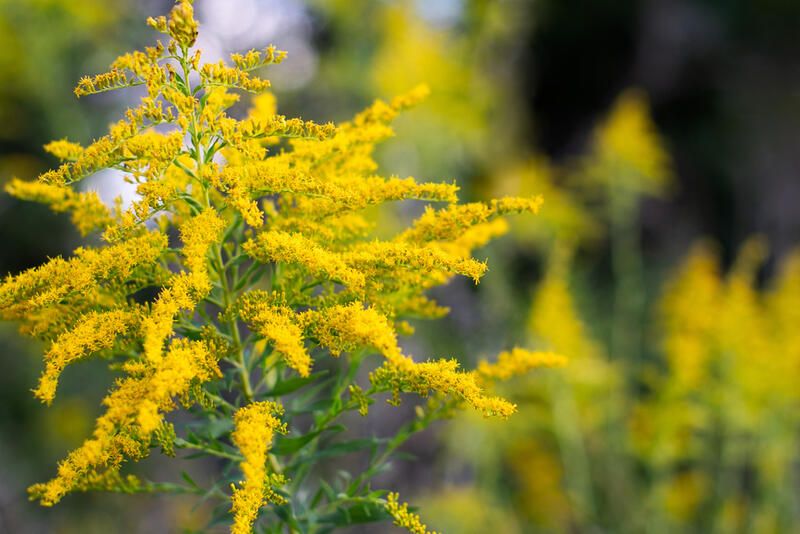 This plant is native to the western United States, where it grows in hot, dry areas with sandy soil.

It's a unique addition to any garden since it produces bright yellow, red, and orange blooms in summer and can grow up to 3 feet tall.

The prickly pear cactus also has clusters of spines on its pads; however, if you're interested in using this plant as ground cover for your garden or patio (which we recommend), simply pull off those prickly needles!

The prickly pear cactus requires full sun and well-drained soil—similar requirements as most other native plants on this list—and will flourish in a variety of climates across Alberta.

The dogwood is a beautiful, medium-sized flowering tree that blooms in April and May.

It has clusters of white or pink flowers that hang from its branches—making it the perfect addition to your garden.

The dogwood is also known as the Pacific Dogwood or Western Flowering Dogwood, and it can grow up to 25 feet tall.

It's a great choice if you're looking for something that can provide privacy in your backyard or patio area. 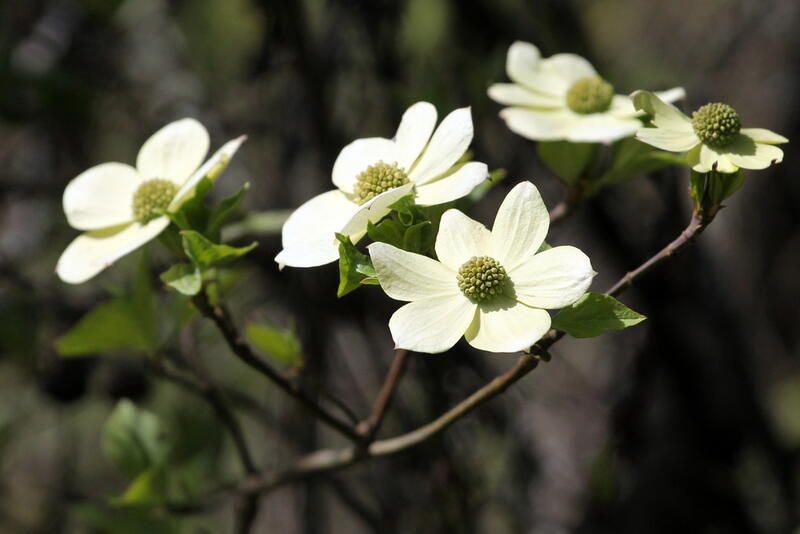 And if you're worried about landscaping your yard the way you want it, then contact ShrubHub's plant experts today for a free consultation session.

You can also check out our seasonal offers for a 70% discount on your first-yard renovation project!